Located in Eastern Europe, Slovakia is a small, landlocked nation of five million inhabitants. Slovakia has rapidly become a popular holiday destination with western visitors, particularly after its accession to the European Union in January 2004.

Rural Slovakia is famed for its natural beauty and is the perfect destination for any visitor seeking a relaxed vacation. In recent years, the country has also attracted thousands of younger visitors, many of whom make the capital, Bratislava, the focal point of their visit.

Slovakia’s climate can be broadly classed as temperate. In general, the country experiences warm summers and cold, overcast winters. However, because of Slovakia’s diverse geography, the climate varies across the country.

The Carpathian mountain range stretches across the country and is a popular skiing destination. The average temperature across this region is a meagre 5 degrees Celsius, with temperatures during the warmest months still falling below 15 degrees Celsius. During the winter months, temperatures often fall well under -5 degrees. Whilst all ski resorts are well equipped to provide visitors with a comfortable stay through the winter, backpacking during these months is not advisable, particularly if you are intending to explore the many villages in the Orava and Spiš regions.

Slovakia’s lowlands have a very pleasant climate. Average annual temperatures fluctuate between 9 and 10 Celsius and temperatures rarely exceed 25 degrees in the summer. The Slovak capital Bratislava is located within this climatic zone.

Things to do in Slovakia

In recent years Slovakia has become a major tourist hub. It remains popular with budget holiday-makers and backpackers, especially as prices tend to be very competitive compared to other European holiday destinations.

Even if you are backpacking across Slovakia, be sure to spend some time exploring the historic city of Bratislava. Most sites of historical significance are located in Bratislava’s Old Town. Bratislava’s town hall, located here, was constructed during the 14th century and is now home to the Bratislava City Museum, one of the largest in Slovakia.

As is the case elsewhere in Slovakia, Baroque architecture dominates the Old Town’s skyline. The Grassalkovich Palace is a prime example of such construction and is the home of the Slovak president. Bratislava’s buildings, however, are not all characteristic of late medieval architecture. The Church of St. Elizabeth was built in 1903 and her construction keenly reflects the art nouveau influences of the period.

If you are planning on visiting the Slovak capital, then Bratislava Castle is a must-see stop. Located above the Danube, the Castle overlooks the city and provides a splendid view of its surroundings. If you are fortunate enough to visit Bratislava on a cloudless day, then you are likely to be able to catch a glimpse of the Austrian capital, Vienna on the horizon.

Slovakia is famous for its natural beauty. The country’s large forests are home to a number of species of brown bears, chamois and lynx. Whilst Slovakia’s former communist rulers were not particularly interested in developing the nation’s tourist infrastructure, they were responsible for the creation of numerous national parks and protected areas and many hotels arrange guided tours and hikes through these areas. (For a list of Slovakia’s national parks, click here.

Whatever your budget, be sure to visit at least one of Slovakia’s many magnificent caves. The Ochtinská Aragonite Cave has been named a UNESCO World Heritage Site and is one of only three aragonite caves in the world.

If you seek something a little more challenging, then why not consider scaling one of the Tatra Mountains? Slovakia’s two mountain ranges, the High Tatras and the Low Tatras attract thousands of visitors each year who wish to take advantage of the excellent ski facilities on offer. Mountain rivers offer fine opportunities for white water rafting and kayaking. 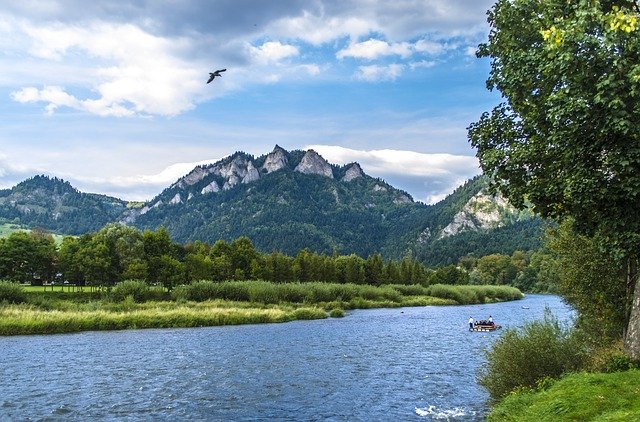 The Dunajec River which runs through northern Slovakia and southern Poland is very popular amongst tourists wishing to experience the best that Slovakia has to offer when it comes to water-sports. Slovak mineral springs and spas provide a fantastic opportunity to unwind after a day of sport. The most famous of these spas is located at Pie ťany. 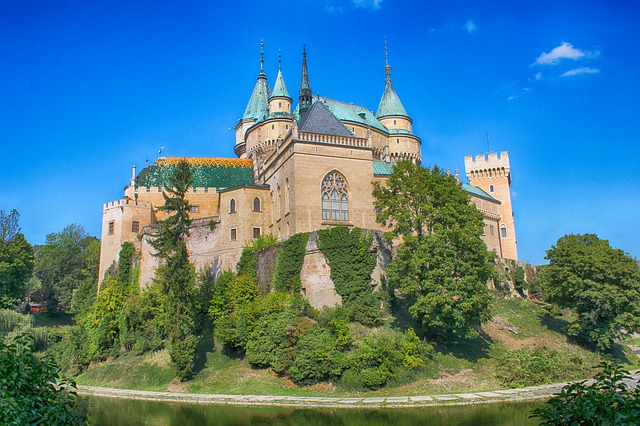 Slovakia has gained international fame for its many magnificent castles. The country has the highest number of fortified castles per capita of any European nation and many Slovak palaces date back to the Middle Ages. Of these, the Bojnice Castle is easily the most famous. It dates back to 1113 and was originally constructed as a wooden fortification. Today, the castle has served as the setting of a number of Hollywood fairytales. It also hosts a summer music festival which always proves popular with visitors to the region.

Slovakia’s many churches are a fine example of Renaissance and Baroque architecture. Two such examples are the Church of the Holy Spirit in the town of Žehra and the St. James Church at Levoča. The latter is a UNESCO World Heritage Site and has the highest wooden altar in the world. The wooden churches of northern and north-eastern Slovakia date as far back as the fifteenth century and are some of the country’s most fragile ancient structures.

Another good way to get an idea of things to do in Slovakia is to scan the activities offered by Get Your Guide or Viator. They work directly with local tour operators at the major tourist spots in Slovakia, so you won’t have to scour the internet or roam around town trying to find the best deal.

How to Travel Around Slovakia

If you’re flying to Slovakia or plan to take short flights within the country, we recommend using a few different flight comparison search engines. Kiwi is a new favourite among travellers. On average, we have found the cheapest flights with them compared to the other websites out there.

Of course, it is always worth checking Skyscanner to guarantee you’re getting the best deal. Both websites offer great flexible search options, allowing you to search the whole country of Slovakia to find the cheapest airport to fly into, and also see prices for a full month if you’re flexible on travel dates.

Bratislava is a very popular destination with holidaymakers and a number of budget airlines offer regular services to the capital. The M. R. Tef Nik Airport is the largest airport in Slovakia and most international airlines use it as their base of operations. It is located some 9km away from the centre of Bratislava.

Travel around Bratislava is relatively easy as the city has developed a good transportation system in recent years. The main railway station is located in Bratislava’s Old Town. It provides services to all parts of Slovakia as well as to the Czech Republic, Austria and Hungary. The Petr alka railway station links Bratislva with the Austrian capital, Vienna.

If you would like to travel from Vienna to Bratislava via a more scenic route, then you might like to consider taking a ferry between the two cities. The Port of Bratislava is one of the largest in the country and a number of tourist companies provide services between the two capitals.

Bratislava’s D1 motorway links the Slovak capital with the cities of Trnava, Nitra, Trenčn, ilina. The D2 motorway connects the capital with Prague and Budapest. Construction is currently underway on a highway linking Bratislava with Vienna. The Slovak authorities have set 15 November 2007 as the expected completion date.

Finding good but inexpensive accommodation is essential while backpacking Slovakia on a budget. Almost all large Slovakian towns have youth hostels that cater to the needs of backpackers and those travelling on a budget.

Campsites are available at most major tourist destinations and are well equipped with telephones, showers and in some cases restaurants. Indeed, the Slovak countryside provides the perfect backdrop for a camping holiday.

Slovak hotels tend to be classified according to the European star system. The quality of hotel services does tend to vary, however. Whilst hotels in Bratislava are generally comparable to those in Prague and Warsaw, rural hotels do not always meet western standards. Slovak resorts, however, are excellent and can make fine holiday destinations.

Like many backpackers, we have had good results finding hostels while backpacking Slovakia on HostelWorld. They have the largest inventory of hostels worldwide, and with over 10 million reviews and ratings from other travellers you know exactly what to expect.

Another good way to find accommodation in Slovakia is by checking hotels.com and  booking.com. With both sites, you’ll not only find hotels, but also homestays, hostels, and other unique accommodation. We have discovered some great finds and have appreciated the ability to book ahead. You can use their advanced filtering to narrow your results by budget, location score, overall review score, and amenities. Many of the places on booking.com also offer free cancellation, which takes the pressure off the planning phase of your trip.

As a part of the European Union, citizens of other EU countries do not require visas. US, Canadian, Mexican, Australian and New Zealand nationals can stay in the country for up to 90 days without a visa. South African citizens require a visa unless they have visas for an indefinite stay in another EU country. If you require a visa, it is advisable to obtain one from your local embassy beforehand as they are not available at the Slovak border.

Health and Safety in Slovakia

As with any trip abroad, it is advisable to take out travel insurance. Visitors to Slovakia do not need to be particularly concerned about contracting illnesses whilst on holiday. If you are backpacking across Slovakia, then it is likely that you will spend a portion of your holiday in the countryside and as such it is advisable to be vaccinated against tick bites before you leave home.

Tap water is safe to consume across the country, indeed a number of studies have suggested that the tap water in the Bratislava region is some of the cleanest in the world. If you are backpacking and do not have access to clean water, then it is advisable to drink bottled mineral water.

Useful links for Backpacking in Slovakia

There you have it, the ultimate Slovakia backpacking guide. We hope you have found all the information you need for backpacking around Slovakia.