Facts About The Netherlands

The open-minded, liberal country of the modern world. The Netherlands leads the way in political progress concerning human rights and has legalized sex work and cannabis. There is so much colour not only in political aspects but also the land itself; beautiful expanses of greenery where you can literally see for miles due to the remarkably flat geography.

Windmills, tulips and canals are everywhere you look and decorate the beautiful scenery with Dutch identity. Amsterdam, the outstanding capital, is a partying city with so much culture to experience that people tend to spend longer here than a lot of other cities.

Climate in The Netherlands

When deciding the best time to visit The Netherlands, weather should play an important role. The Netherlands experience a mild climate with prevalent rainfall all year round. The summer months are reasonably warm, but hot weather is not very common. Wintertime is generally quite cold and snow can be expected.

Things to do in The Netherlands 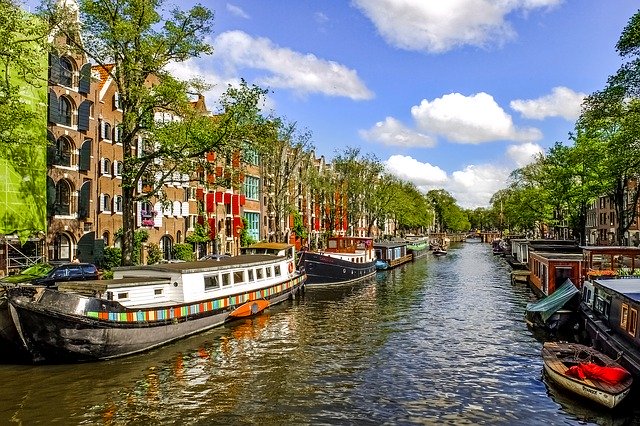 Amsterdam is host to so many sight-seeing treats; the numerous flowing canals and renowned museums deserve to have the high reputation that they have been given. One of the most famous is The Van Gogh Museum and it is definitely worth a visit if you are taken by this artists work. The museum has some of his most famous work from the beginning of his life as an artist in Holland until his death in France.

The story of Anne Frank, the Jewish teenager who spent the end of her days in hiding before being deported to a concentration camp, is known and felt by millions. The house where Anne Frank and her family hid from the Nazis during Second World War has been named The Anne Frank House and has developed into a memorial site, which is a very moving place to see.

Amsterdam undeniably attracts thousands of tourists every year not only for its culture and artistic brilliance but also due to the fact that it is host to loads of Coffeeshops, which are in fact Marijuana cafes and dispensaries. In a city where you can have a spliff with your cup of coffee, rather than a biscuit, it is clear why Amsterdam is such a big attraction.

Since Amsterdam is one of the most visited cities in the world, it is wise to book tickets to popular attractions (landmarks, museums) ahead of time to avoid the lines. GetYourGuide sells entrance tickets at face value and you can avoid waiting in line. You might also see ‘Skip the Line‘ tickets on their site. This actually refers to a separate entrance for a higher ticket price. It can be a worthwhile cost for crowded sites like the Anne Frank House, which can have up to a 2 hour wait time for General Entrance during peak tourist season. 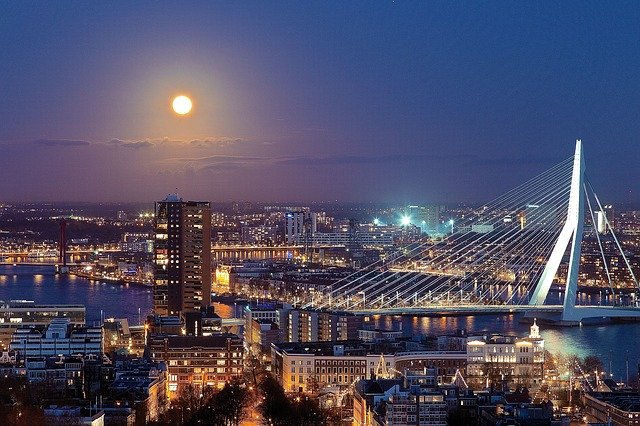 Rotterdam in The Netherlands

Rotterdam is another of the Netherlands beautiful cities and renowned for its architectural brilliance. There is so much to see and do, but one of the best sights, and a starting point, is a boat ride which leaves from Europort, the world’s largest port, and tours around the city for over an hour.

The outstanding Erasmus Bridge, constructed by a Dutch architect, Ben van Berkel, is a light blue colour so during the day it can actually be difficult to see in bright sunlight, but at night, white light illuminates the bridge and you can really see what an incredible masterpiece this Bridge is. 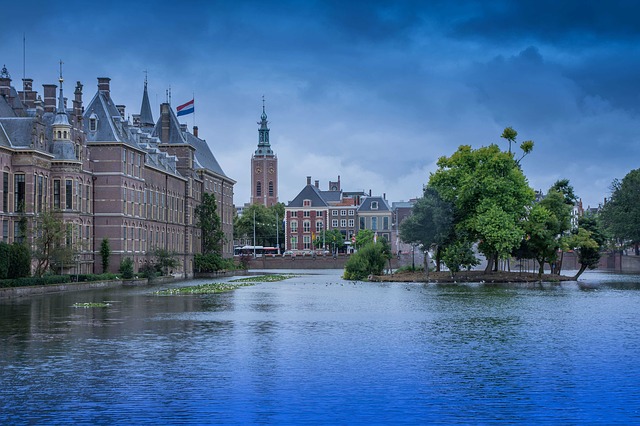 The Hague is the political centre in the Netherlands and the ‘Binnenhof’ is host to the parliament buildings. You can go on guided tours around the complex and the 13th century Knights Hall is fascinating. There is also The Peace Palace where the International Court of Justice and the Permanent Court of Arbitration are situated, and again these outstanding buildings are accessible by guided tours.

Finally, Lang Voorhout, an extensive lane between Kneuterdijk and Tournooiveld, has developed into the residential area for members of the government. There are lime trees along the roadside which decorate this famous area, where you can also find the Diligentia Theatre.

Unique activities in The Netherlands

Another good way to get an idea of things to do in the Netherlands is to scan the activities offered by Get Your Guide or Viator. They work directly with local tour operators, so you won’t have to scour the internet or roam around town trying to find the best deal.

If you know your schedule ahead of time, a great insider tip is to buy tickets for major tourist attractions ahead of time. Tiqets has entrance tickets and skip the line passes for major attractions in The Netherlands so that you can avoid the lines and save that precious time for more exploring.

How to Travel Around The Netherlands

If you’re flying to The Netherlands, we recommend using a few different flight comparison search engines. Kiwi is a new favourite among travellers. On average, we have found the cheapest flights to the Netherlands with them compared to the other websites out there.

Of course, it is always worth checking Skyscanner to guarantee you’re getting the best deal. Both websites offer great flexible search options, allowing you to search the whole country of The Netherlands to find the cheapest airport to fly into, and also see prices for a full month if you’re flexible on travel dates.

The public transport system in the Netherlands is very efficient. You are able to travel anywhere in the country thanks to this well-thought-out system where no matter how small the village is, you can be assured that it is linked to the transportation network.

Train and long-distance bus are the standard modes of transport for getting around the country. Buses are the more economical option, nevertheless, they are well-equipped with the usual modern conveniences that expect when travelling in Europe. Train travel, on the other hand, is the fastest way between two cities and the train stations are conveniently located right in the centre of town.

It depends on your preference, and certain routes are better suited to one mode of transport than the other. To compare your options for journeys from A to B, you can try Omio. They compare trains, buses (and even flights) so you can decide for yourself the tradeoff between cost and travel time.

Train travel in The Netherlands

The railway network is modern and notably, the trains run by the Netherlands Railways (NS) are among the best in Europe. The Intercity IC network runs a direct and rapid service between major cities, only making a limited number of stops. There are even trains that run throughout the night and, departing every hour, these trains connect the major cities, including Amsterdam Schiphol Airport. Train Timetables can be found on the NS website.

Bus travel in The Netherlands

If you are travelling short distances then the bus is also a great means of transport. There are city buses, regional buses and express services. The buses run reasonably regularly to destinations in and around the cities, but it is during peak hours when the buses run most frequently. There is also the Interliner service available for longer distances.

The main cities of Amsterdam, The Hague and Rotterdam offer a tram service and Amsterdam and Rotterdam also have an underground network. Services by both these methods of transport are rapid and run from early morning until late at night.

There are public transport tickets for use on buses, trams and the underground. The National Strippen Card can be used all over the country and is also valid on trains which run within the major cities: Amsterdam, Rotterdam, Utrecht and The Hague. The Strippen Cards can be purchased at railway stations, post offices, newsagents and department stores. It is cheaper to buy it from one of these stated places as if you by it on the bus or tram it is more expensive.

The transport system has been divided up into zones and the tariffs relate to these zones. To travel to one zone you pay two ‘strips’ and then every zone after you pay one ‘strip’. Once in a zone you travel ‘free’ within a certain time limit.

Driving in The Netherlands

Backpacking Tours in The Netherlands

Though part of the fun of backpacking in The Netherlands is exploring on your own, there are situations, especially when venturing off the tourist trail, when it does make sense to go with a guide or a small group. For these times, a popular option among backpackers is G Adventures. They hand-select local guides to ensure authenticity and quality.

Hostels in The Netherlands

The Netherlands has a huge variety of accommodation options, ranging from extremely expensive to very affordable.

We have had good experiences finding hostels in The Netherlands on HostelWorld. They have the largest inventory of hostels worldwide, and with over 10 million reviews and ratings from other travellers, you know exactly what to expect.

Another good way to find accommodation in The Netherlands is by checking hotels.com and  booking.com. With both sites, you’ll not only find hotels, but also homestays, hostels, and other unique accommodation. We have discovered some great finds and have appreciated the ability to book ahead. You can use their advanced filtering to narrow your results by budget, location score, overall review score, and amenities. Many of the places on booking.com also offer free cancellation, which takes the pressure off the planning phase of your trip.

Another reasonably inexpensive way of visiting the Netherlands is to stay in one of the many campsites. Not all campsites offer pre-booking so it is just a matter of asking on the spot. The Netherlands Board of Tourism can give you a full list of available campsites and reservations for some can be made through the Stichting Vrije Recreatie at www.svr.nl.

Entry Visa Requirements for The Netherlands

EU or US Nationals will require a valid passport or national ID card for the duration of their stay, up to three months. If the visit is more than three months then a visa is required. For information regarding visas contact the Dutch Embassy.

Health and Safety in The Netherlands

You require an E111 form which entitles you to emergency medical treatment on the same terms as Dutch nationals. This form is free of charge and can be collected from any post office, who also stamp it after you have completed it. You are recommended to take adequate medical and travel insurance too, and the post office offers good cover for around £30.

Useful Links for Backpacking in The Netherlands

How to Travel Europe by Train